The State of Capital Adequacy of Banks in 2021 in Uganda

The financial sector was much more stable in 2019, with only five Banks reported as undercapitalized. This was mainly due to high impairment charges, the risky private-sector lending. 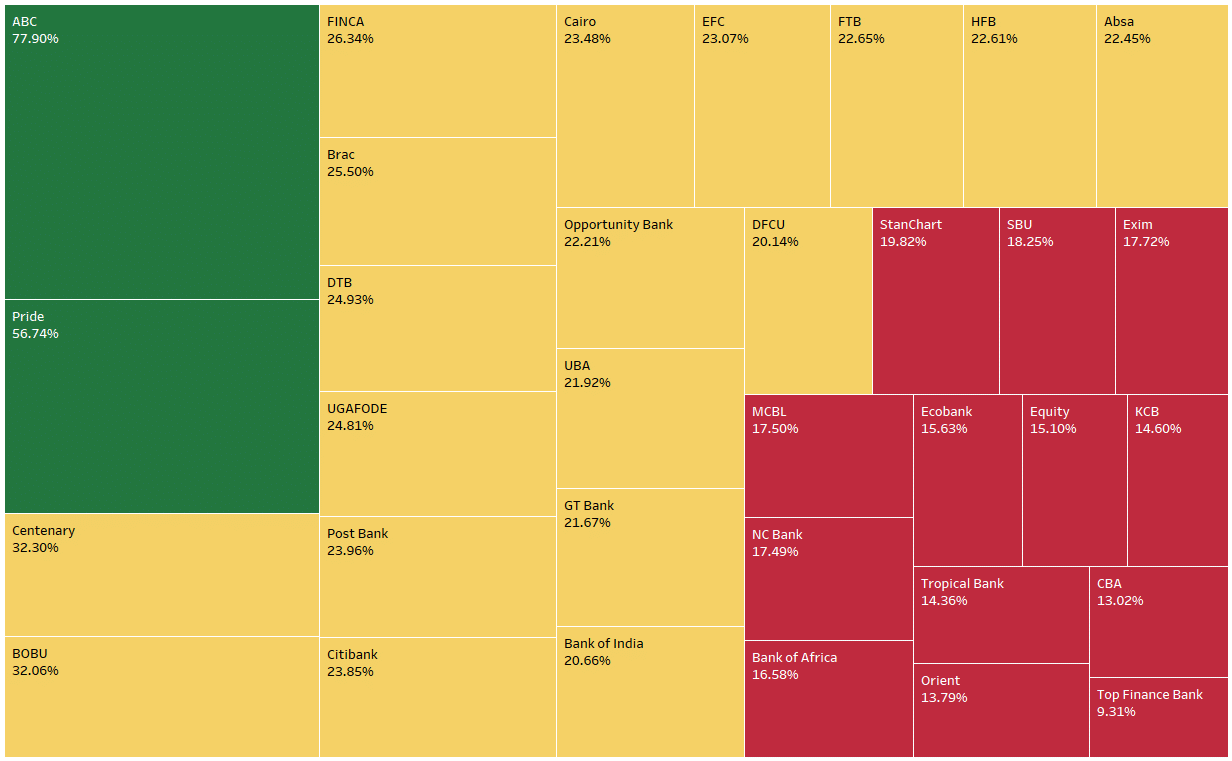 At least 15 financial institutions had core capital below the industry average, including top Banks like Absa, DFCU, Equity, and KCB bank. Three of the fifteen were undercapitalized, that is, Top Finance Bank, Tropical Bank, and Yako. These Banks were almost at the brink of the Basel III recommendations for solvency for tier 1 core capital, which requires a minimum of 6.5% to counter looming counter-cyclical stocks.

Cairo International Bank had the highest expected yield to maturity for a bond on Uganda’s market with a high saturation of Equity financing compared to debt. Banks with a high Yield to maturity, which is, above 18%, were predominantly funded by Equity and had lower debt financing compared to their peers. It thus costs Cairo International Bank more than it would cost NC Bank to raise capital, considering their capital structuring is predominantly Equity, which is subject to tax. 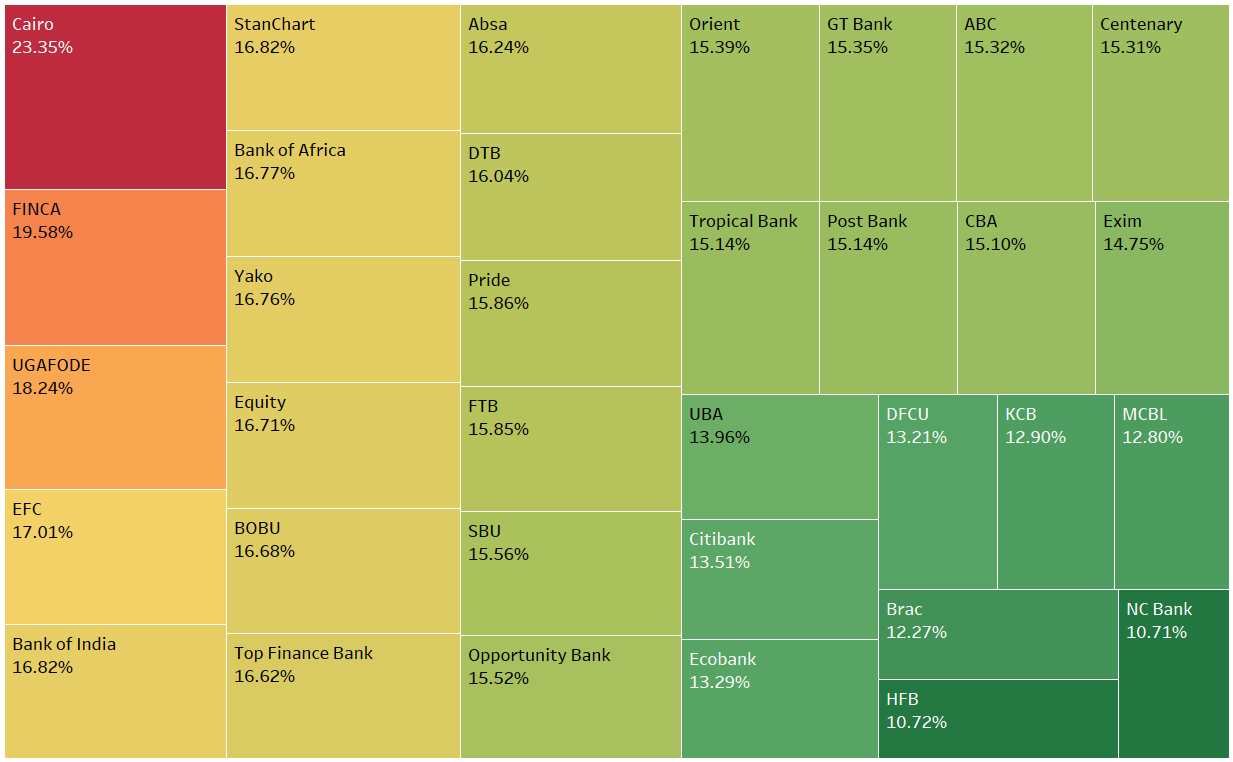 While debt is cheaper to raise than Equity, it reduces the bank’s valuation on the Equity market in case of listing. Summit Consulting conducted a top-down analysis of the financial institutions’ expected cash flows in both the short term and long term to assess the net worth of each bank, the possibility of insolvency, and the expected rate of return to stakeholders.

More than seven financial institutions will have their expected medium-term cash flows giving investors no returns with their current business model. Most of these financial institutions are highly leveraged and have not been making a profit over the years. The six-year forecast also sets aside those Banks that will give a rate of return lower than what the investors will be willing to receive.

Banks like Equity, Bank of Baroda, and Housing Finance are set to more than double any shareholder capital in the medium-term with rates of return higher than 100%. Other top cash cows will include Ecobank, Stanbic Bank, Opportunity Bank, and Post Bank.

Banks like BRAC Finance, Exim, FTB, and UGAFODE were highly leveraged and thus had their Equity values sink. They are expected to pay out most of their earnings as interest payments. While they had a low cost of capital due to increased leverage and the tax cushion from the interest on their debt securities, the same interest further depleted their expected returns. These Banks are set to divert their business models away from too much leverage to an optimal mix. 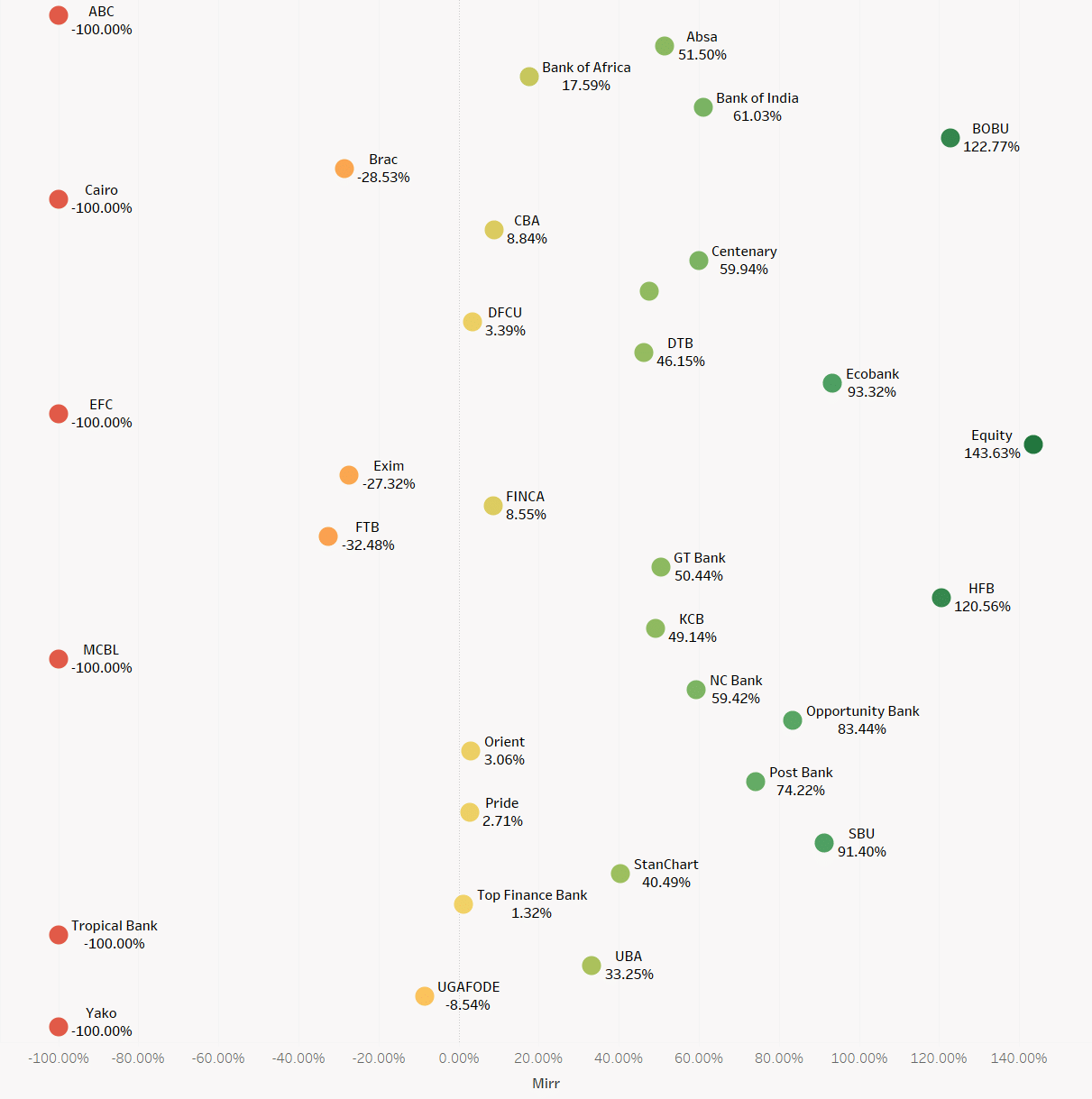 Tropical Bank, EFC, Yako, Cairo, and ABC will have to restructure their business model in the medium term to improve shareholder returns. While not all these are loss-making, some have business models that only support low operationalization. Summit Consulting’s projections are based on the full optimization of resources while maintaining capital adequacy.

Housing Finance Bank remains the most valued bank with a high Equity value of more than Ugx. 12.9 trillion, followed by Stanbic Bank (Ugx. 4.4 trillion) and Equity Bank(Ugx 3.9 trillion). While Ecobank(Ugx. 2.3 trillion), Centenary Bank(Ugx. 1.8 trillion), and Absa bank (Ugx. 1.3 trillion) also proved to give shareholders high value for their investment. These Banks are strongly advised to list on the Uganda Securities Exchange to boost their capital and also improve the capital markets.

Pride Microfinance Limited is the only non-deposit-taking institution that commanded high expected cash flows and a formidable Equity value of more than Ugx. 89 billion.

This valuation excluded the looming mergers like that of CBA and NC bank that will see the two Banks grow their assets and enjoy synergies that could boost shareholder value.

Uganda capital markets continue to struggle with low listings and limited activity. While the financial sector is the most developed and regulated in the economy, only 11.7% of these Banks have been listed on the Uganda Securities Exchange. We expect the leading sectors to push the economy to leapfrog. A highly regulated sector like the banking sector should not have a challenge getting listed on the stock exchange. Considering these financial institutions are already required to submit documents that are part of the exchange consideration, like in Vietnam, the financial system should push Equity markets in the country.

There should be policies to ensure most of these Banks list on the exchange, especially for those that have been solvent for many a year and have continued to make massive profitability. While some Banks that have struggled could also get a hand from external financing, they will not command a formidable IPO and will leave most of the investors worried.

The debt securities market also remains underdeveloped, especially with corporate bonds. Banks should look to issue securities to reduce dependence on customer deposits to finance their investment activity. While deposits are the cheapest form of financing, overdependence exposes financial institutions to solvency problems in case of bank runs, one of the key effects of the 2009 financial crisis that led to the closure of top international financial intermediaries.

Transforming financial services delivery at the grassroots: an interview with Pebuu Africa CEO

We currently find ourselves in a frenzy of the e-payment revolution: the payments field is dotted with players as diverse in the product as
READ MORE

Is your colleague a SNAKE or a LADDER?

Out for a walk one morning, a workmate started explaining to a colleague how they hated their job. He explained that “I have been
READ MORE

Talent is useless without hard work

If you don’t work hard on your talent today, you could die with it just like a anybody. You will never your potential. At
READ MORE

How to avoid being a cyber-crime victim

Whether you access the Internet on your mobile phone, tablet or computer, you are exposed to cyber criminals. They are lurking on-line, searching for
READ MORE